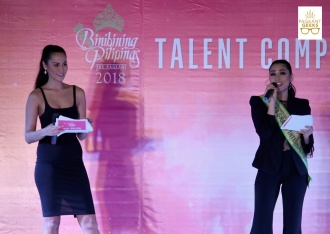 The event was hosted by the two incumbent titleholders of Aussie roots:  Chanel Olive Thomas (Bb. Pilipinas-Supranational 2017) and Elizabeth Clenci (Bb. Pilipinas-Grand International 2017). Providing bonus entertainment was Pinoy Boyband Superstar finalist Marcus Peterson, who serenaded the ladies with My Girl. The non-participating binibinis were at the audience.

15 candidates participated in this optional category, the winner of which will be given a special award on pageant night. As per tradition, this pocket contest doesn’t constitute a huge percentage in the overall score. However, it does guarantee precious brownie points to whoever will make a good impression.

Here’s how we ranked the performances:

#15 – Binibini #19 – Michele Theresa Gumabao. The bold move could have paid off if her pooches actually cooperated. One thing’s for sure: dogs get stage fright too.

#14 – Binibini #4 – Ana Patricia Asturias. The returnee from 2017 sang an acoustic medley of Sound of Music tunes that didn’t really jell in terms of tempo. But hey, her brother got attention.

#13 – Binibini #1 – Vickie Marie Rushton. Her instrumental keyboard rendition of Teri DeSario’s Fallin‘ had audience members singing along, but you all know the downside of performing first: it was forgotten easily.

#12 – Binibini #30 – Sarah Margarette Joson. Her patriotic-themed interpretative dance started gracefully enough, but it all went shaky when her partner came in. The performance also ended abruptly.

#11 – Binibini #7 – Sigrid Grace Flores. Her vocals were decent and her Moana-themed outfit was, to quote to hosts, “on point”. But rendering How Far I’ll Go in ukulele somewhat diluted its emotional impact.

#10 – Binibini #27 – Henna Kaizelle Cajandig. The BBP two-timer (and MWP crossover) performed a malong dance as an ode to her home province of Sultan Kudarat. Nothing we haven’t seen before, but to her credit, she looked regal.

#9 – Binibini #2 – Katherine Jane Ventura. She flubbed some of the words to Mariah Carey and Whitney Houston‘s When You Believe (a song that turns 20 this year, believe it or not), but her strong-enough vocals made her performance credible.

#8 – Binibini #26 – Loren May Artajos. Her rendition of Whitney Houston’s 1988 Olympic anthem, One Moment in Time, was screechy in spots, but she hit the high notes that matter, leading to a powerful finish.

#7 – Binibini #28 – Angelica Mae Corbe. Her scintillating belly-dance number could have used more splashes of color costume-wise but, hey, she had fun.

#5 – Binibini #23 – Ena Louis Velasco. She brought drama and attitude while dancing to Sarah Geronimo‘s Tala. On a side note: That better be fake fur.

#4 – Binibini #20 – Catriona Elisa Gray. Yes, she lost the Miss World Talent Fast Track by a hair in 2016. And yes, she could already record an album if she wanted to. We’re glad she’s shedding off her Miss World veneer bit by bit, but an Adele song might have been too big for her jazzy warble. 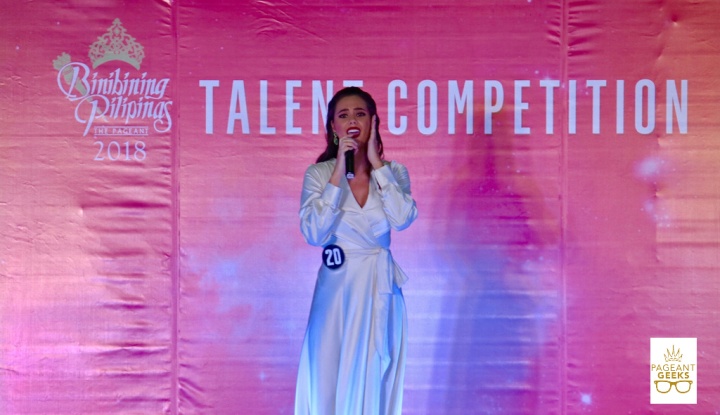 #3 – Binibini #40 – Angelie Aubrey Asuncion. She went on self-imposed hiatus from singing due to an embarrassing incident. But her silky- smooth take on Sitti‘s breakthrough hit Para Sa Akin was enough to make one say: Hey girl, perhaps it’s high time you started pursuing it again.

#2 – Binibini #8 – Marie Sherry Ann Tormes. When you take on Aretha Franklin in a talent competition, you better deliver. And deliver she did! The Miss Earth Philippines alum performed a spot-on, powerful cover of (You Make Me Feel Like a) Natural Woman. She looked and sounded like a pro, Jessica Rabbit gown and all.

#1 – Binibini #14 – Samantha Mae Bernardo. Individually, there’s nothing too novel with doing a folk dance and a gymnastic routine. But to perform a mash-up of both, with only a split-second quick change as transition, requires both versatility and agility. That’s exactly why we think she might replicate her MWP2013 Talent win. 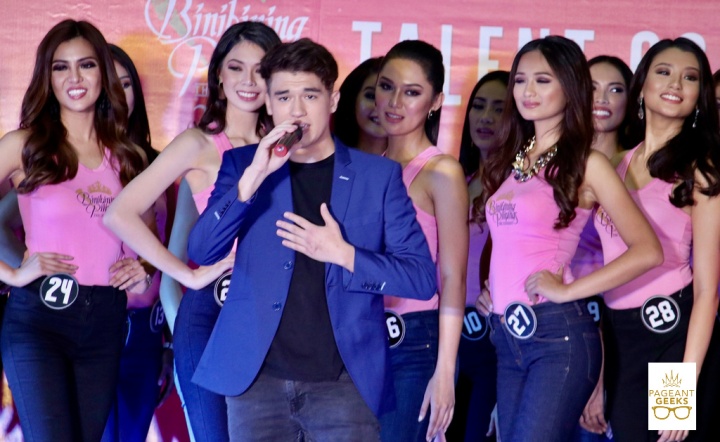